Here is fifth class, we have been doing a lot throughout the year but there was one thing that really stood out, the ski jump. The ski jump was a fantastic project, we didn’t only make them and jump them, there’s a lot more…….
First we made the actual skier’s, some people made them lying on the skis and some made them standing, after we had to test them, we tested them on a test ramp, we made the test ramp by getting some cardboard and sticking the top edge to the wall and the bottom edge to the bottom of a table, we made it slippery by sticking on some gold tinfoil and it had less friction. Then we did some math on it. We had to find out the average of the three runs and the percentage increase between the highest and lowest score of the student. We also created some bar and pie charts. Then the final part to this big project was we had to write an essay, it would have to have a first draft and final draft, most of our essays were four pages long and had an introduction,body and conclusion.
That’s everything from 5th class, Thanks for reading. By Niamh  ​ 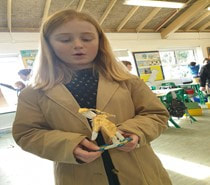